The Katsina State Government has placed a ban on the use of Facebook and Whatsapp in schools across the state.

It also banned social media usage among civil servants in the state.

The ban was contained in a circular with number MOE/ZDKT/ADG/VOL.1 by the state’s Ministry of Education’s Zonal Education Quality Assurance and sent to all heads and principals of public schools in the state.

In the circular signed by the state’s Zonal Coordinator, Muhammad Sada Dikko, the state government also directed principals to abolish all existing Whatsapp groups in their respective schools.

The government said workers should not use Facebook to comment on its activities, either positively or negatively.

The circular, dated December 7 and titled, “Abolishing of WhatsApp group in our schools” reads, “I am directed to write and inform all the principals to direct the various Group Admin in their respective schools to wipe out the so-called school WhatsApp.

“The abolishing of this group becomes necessary due to the multiple postings being made, which create problems and insubordination between the school authority and its staff.

“Principals should also remind their staff about the government circular that prohibits any civil servant from commenting positively or negatively on government activities on Facebook or WhatsApp.” 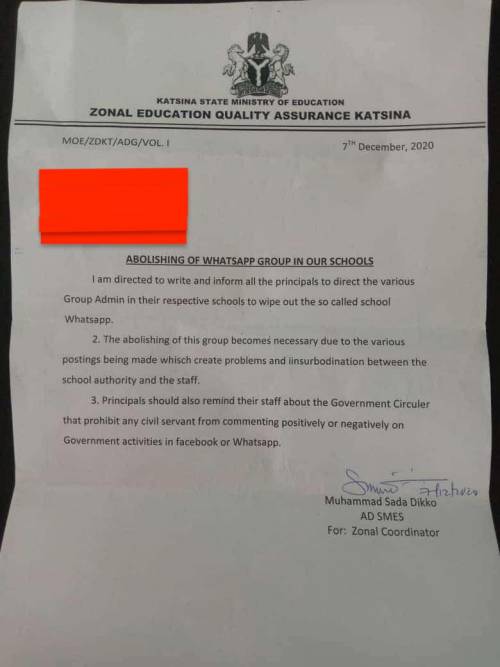 We need support to grow. If you love what we are doing, Kindly CLICK ME to donate and support this effort. Thanks!

You May Have Missed